**Warning - This post may contain spoilers**
So I interrupt the general themed posts (of poetry and prose) of this blog, to bring you all a little movie review. (Review on Kyle Schmid as Lance Dancaster in GravyTrain redirects > Here!) The film in question? It's called GravyTrain.

GravyTrain is a retro (think 70's) style indie Canadian comedy by the same twosome, April Mullen and Tim Doiron, who made the other indie gem Rock, Paper, Scissors: The Way of the Tosser.

The film centers around Gypsy Creeks #1 cop Charles "Chuck" GravyTrain (played by Doiron) and his new partner Ms. Uma Booma (played by Mullen), as they go on the hunt in and around Gypsy Creek, for the elusive Jimmy Fish Eyes, who had killed Chuck's father several years before. Of course several obstacles seem to get in the way of catching the elusive killer, including the fact that many of the potential leads, themselves end up victims of The Fish, begging the question "Where's the Fish?" (or even more so "Who IS the Fish?")

The film had a beautiful aesthetic about it, both in sound and cinematography.

Beginning with its look in the way in which it was shot (using Red One camera technology) amplifying, the sharp detail of, for example, the black and white in the opening sequence, to the funky, grainy retro feel of the soft pastel colours in the clothing and decor, to the kaleidoscopic FX in Chuck's psychedelic dream trip.

GravyTrain was alive with beautifully contrasting visuals, the essence of which was not lost on this amateur photographer. And the selection of groovy tunes from the day helped to compliment the overall I feel like I'm there, baby! feel.

Personally, I found GravyTrain, to be a hoot!

A slapstick, tongue-in-cheek comedy, which, much like the actors there in, doesn't take itself too seriously.
Some parts had me laughing hard, even to tears with the unexpected one liners and outlandish scenes.

And, maybe it's just me, but there still seems to be "a mystery" surrounding a certain "shadowy figure" at the Devil's Pitch Fork bar? I can surely see this having a sequel or more in the genre.

I loved the original, trippy, campy, silly nature of GravyTrain, tied together by the plot and whodunit mystery, which kept me guessing right until the "big catch".
Posted by Sonika E at 4:56 PM

The Pen is mightier than the Sword... 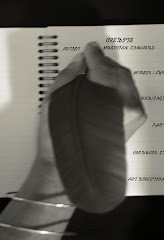 The only blood spilt - the written word!